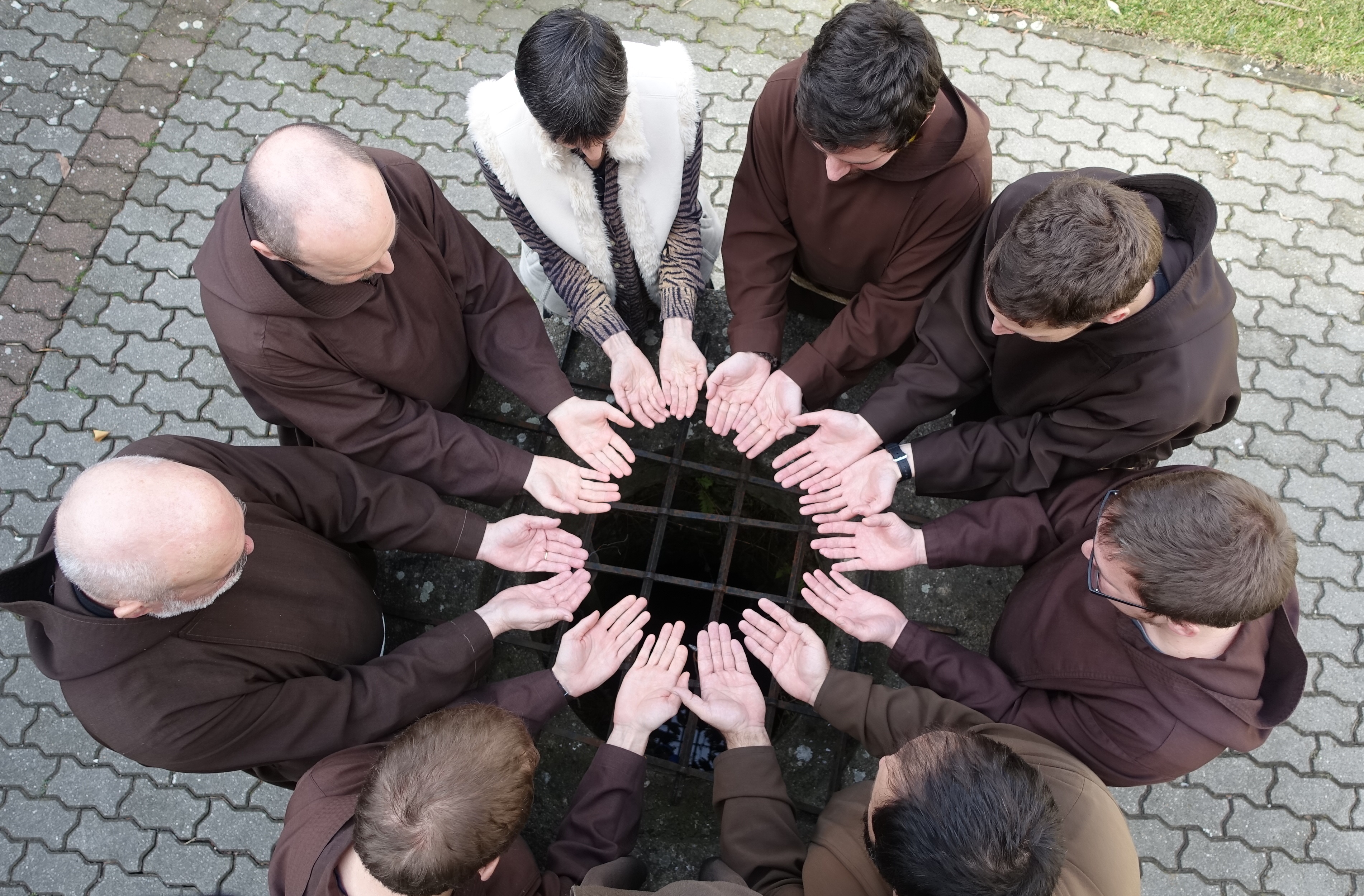 We have received the following message from Teresia Hašanová, international contact for Czechia and Slovakia, who has paid a visit to some Capuchin Friars to teach them Centering Prayer.

Last year at the beginning of November I received an email from a Capuchin Friar. He found my name on CO international contacts. We agreed to talk via skype. To my pleasant surprise I found myself talking to a young handsome friar, still studying, with final vows, already acquainted with three of Thomas Keating's books. On behalf of his superior he asked me to come to introduce them to Centering Prayer. Not only would they like to practise it, but they would like to teach it in their monastery as well. He asked me to come for a weekend in February (14 – 16).

Bratislava is the capital of Slovakia, I live more than 200 miles from it to the west. Since I have a very good headmistress I planned my journey for Thursday so I could have a rest before working with the friars. Just the night before my departure it started snowing. The country looked like on a pretty Christmas card and I thought that was the end of my journey even before it had started. Fortunately the snow melted the next morning so I started my long journey. Everything went well and I was in Bratislava at 5.30 pm. My friend was waiting for me. I spent the night at her home, but in the evening I had a very interesting meeting with a young student, who wanted to talk to me. He arranged for me another meeting for the next day and so before seeing the friars I went to see one nun, who had Cynthia´s Centering Prayer in front of her. She uses the book with her group and they try to sit in silence. She was delighted to talk to me and wants me to come to their Center to give an Introduction to CP. She, as well as the Friars would like to learn about it and teach it. Isn´t that lovely?

Finally I got to the Capuchin church where they had a Mass for the children, after which I was taken to my room and to my surprise I had supper with all the monks in their private part of the monastery.

I was introduced to each one of them. There were about 20 monks.

Seven of them were interested in CP. Five young students, their superior and one older friar. A lovely group.

The eager friars wanted to start with CP (not with talking) straight away after supper at 7.30 p.m. All our meetings were in a small chapel in front of the Blessed Sacrament.

Having introduced myself, I humbly appreciated their yearning to know about CP. The first thing I had to explain to them was that we do not do CP in the evening after the meal. Disappointed, they accepted our rules. I told them about our plans. First, I talked a bit about CO and how CP was started and then we had as part one Prayer as Relationship. We closed our first evening with 30 minutes adoration.

On Saturday morning we started our day at 7.30 a.m. The Mass was in their private chapel, the singing was very good. After breakfast we started our second session The Method of CP, followed by the first 20 minutes. There were quite a lot of questions about the sacred word and various other things. Before lunch we had the third session Thoughts and Use of the Sacred Word, followed by the second 20 minutes CP, discussion with a lot of questions and comments. We laughed a lot, they were teasing each other. We had lunch, a small break and we met again at 2 p.m. to finish with the fourth part Deepening Our Relationship With God. To make the most of my time, they wanted to hear and know more. (Like in Oliver Twist I want some more?!) Since I can´t go there the next six weeks as required, I used some of my translated material and we did one of the six follow up sessions What CP is not. We finished our afternoon before 5 p.m. I have to admit I was a bit tired, but with my capacitar dance and a promise of visiting a pub with the monks I gained new strength. The monks took me to the pub, where we had supper and then they showed me a part of the old town. We all had an early night.

Because I told them about back to back meditation, of course they wanted to have a go. So that was our Sunday morning start. We met at the chapel and had 2 x 20 min. with "Slowly Blooms the Rose Within". Then we had breakfast.

This was a very special time for me. There were two girls aged 11,12 (the same age I teach at school) they were one of our CP brother´s nieces. When I see the children, I always try to teach them how to sit in silence and also the leadership dance. So I took my opportunity and asked them whether they would help me to teach the monks something new. My cunning plan was really to get them, but I used the monks as an excuse. By the way, the monks teach the children as well, and we were talking about my experiences with my children at school, so I wanted to share it with them. The girls were quite willing, and it was absolutely wonderful. We were sitting (all of us) in the refectory in silence for about 1 or 2 minutes, and then we were dancing the leadership dance.

After breakfast the monks and I continued with our work. They still wanted to hear and know more. Fortunately, I had with me the Open Mind… translation, and they wanted to hear the chapter Wandering Imagination. Then we were talking, I taught them: "God is, God is, the heart of the hear… All shall be well" and we finished with Mass. It was beautiful.

Pictures were taken. My things were packed. Hugs were given and off I went westward,

HAPPY and FULL of GRATITUDE.

Teresia has also written about her own spiritual journey:

My first encounter with Centering Prayer was in 2010 in Cambridge, England, where I was taking a two year course of study on The Art of Spiritual Direction.

One of my fellow students invited me to a Centering Prayer group meeting. From the very beginning I knew that this was just right for me. I have been practising it ever since.

When I came back to my country - Czechia, I started a small Centering Prayer group in my village.

I continued to be in contact with the Cambridge CP group (for it was my only support) and attended the first Holy Isle Wisdom School with Cynthia Bourgeault. I have continued to attend every year.

There I met Jill Benet, and I asked her whether I could be trained as a presenter of Centering Prayer.

I was requested to teach Centering Prayer in my country, and four months later I led my first Introduction in Czechia.

In February 2018 I was invited to England for another training led by Jill Benet and Brenda Bayne.

After that I was invited by the global team of Contemplative Outreach to be the contact for Czechia and Slovakia.

Since 2016 I have been coming back to London to make my 8 Day CP Intensive Retreat with Jill Benet, to whom I am deeply grateful for helping me on my spiritual way.